The government has acted to ensure state pension increases can happen next April. 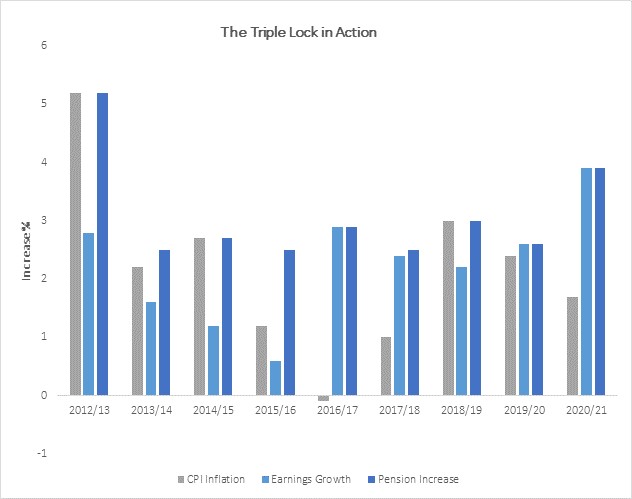 The Basic State Pension (BSP) and the New State Pension (NSP) – for anyone who reached State Pension Age after 5 April 2016 – are both subject to the ‘Triple Lock’ measure. This means that every April these two pensions increase by the greater of:

The Triple Lock is a feature that the main political parties pledged to maintain in their 2019 election manifestos, but despite political promises, the Triple Lock has no legal standing. The law governing increases to the BSP and NSP is based on earnings growth. Earnings growth applies to the April 2020 increases (of 3.9%), but in years when it does not take the top slot, the government overrides the statutory rules.

In September, the Office for National Statistics (ONS) published the Triple Lock earnings growth data, showing that year on year, earnings had fallen by 1%. The drop presented a problem for the Department for Work and Pensions (DWP), as it viewed the legislation as saying that if earnings growth was below 0%, pension payments must be frozen, with no scope for discretion. In response, the DWP rapidly put a Bill into Parliament to amend the law and allow the Triple Lock measure to continue.

Curiously, the Bill only applies for 2021 and does no more than allow the Secretary of State to choose the increase level – there is no reference to the Triple Lock. In practice, the BSP and NSP should rise by 2.5%, as CPI inflation to September will be lower.

The 2021/22 NSP will therefore be £179.60 a week (£9,339 a year), a timely reminder that for all the legislative gaming of the numbers, state provision is far from adequate for a comfortable retirement.

The value of your investment can go down as well as up and you may not get back the full amount you invested. Past performance is not a reliable indicator of future performance.

Stirling House uses cookies to deliver superior functionality and to enhance your experience of our websites. We use Google Analytics to provide us with anonymous statistical information on visits to our websites. Our cookies do not collect personal information. However, you may prefer to disable cookies on this site and on others. The most effective way to do this is to disable cookies in your browser. Continued use of this site indicates that you accept this policy.